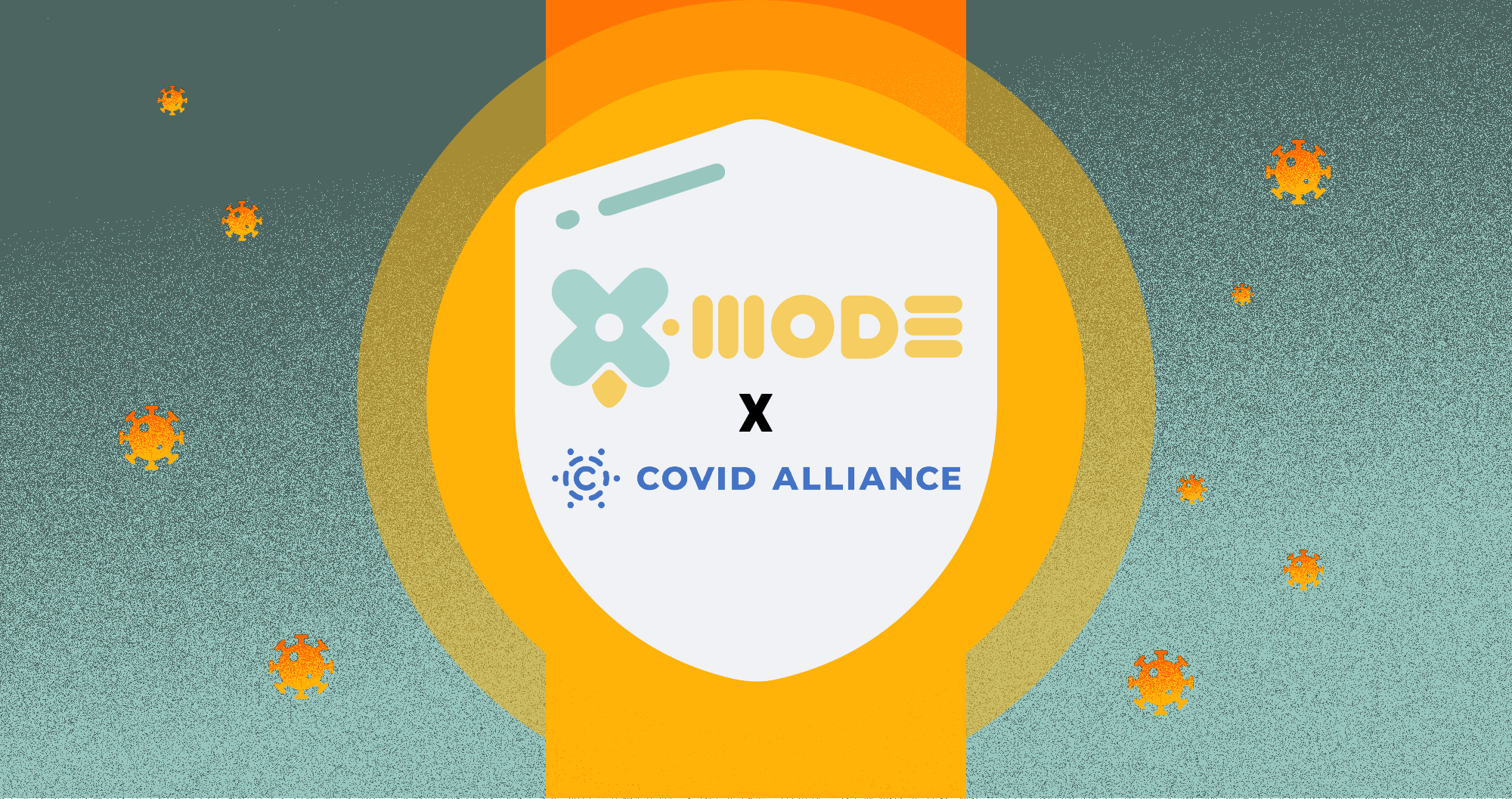 Location Data and Pandemic Response: An Interview with the Covid Alliance

Learn from Daniel Wein of the Covid Alliance about their new Pandemic Management Platform, and the role location data can play in pandemic response!

During this time of crisis, many organizations and experts have risen to the cause in order to help fight the spread of COVID-19. One such group is the Covid Alliance. The Covid Alliance is “a volunteer-powered nonprofit coalition bringing together best-in-class expertise across science, technology, and policy in a coordinated response to COVID-19.” Using X-Mode’s location data — among other tools — the organization has built tools to aid policy makers and local governments in their pandemic response. I sat down last week with Daniel Wein from the Covid Alliance to talk about their history, their response strategy, and the wider implications of data use during the pandemic.

Joseph Green (X-Mode Content Manager): Could you start by introducing yourself, and outlining your role in the Covid Alliance?

Daniel Wein: My name is Daniel Wein, I’m the Head of Communications at the Covid Alliance. My background is in corporate and political communications; most recently, I worked on a presidential campaign and a social impact team at Facebook. I started my career in communications within the  social justice movement.

J: Tell me a little bit about the Covid Alliance, how they came together, and who makes up that team.

D: The Covid Alliance is a group of policy experts, tech experts, and scientists, many of whom have varying backgrounds in  disaster response, including epidemics around the world. They came together early in mid-March around a simple question: what would be the best way to pool resources in order to help policy makers during the pandemic? There was an initial understanding that Big Tech had a lot to offer, but state and local governments (not to mention the public) might be a little apprehensive about partnering directly with technology companies right now. At the same time, going directly through a government entities wouldn’t necessarily be the best case either, as they have layers of bureaucracy that might inhibit the speed of innovation that is needed in the midst of a pandemic.

That’s where the Covid Alliance comes in. We’re working with tech and data companies, and we’re partnering with governments, but we’re not a formal part of either. Our thought was: if we have this great team — made up of some of the nation’s top minds in virology, epidemiology, and policy research — what products can we build over the next several weeks that will be of maximum value to what the country is going to need?

The first product we built is the Pandemic Management Platform (PMP), of which X-Mode’s data panel is the foundational element. We have built this with an entirely pro-bono tech team — I think we have something like 50 engineers who have worked on this — and we finished V1 of it this week. The functionality of it is kind of insane. Essentially we’ve been taking the X-Mode data panel, layering it on top of different maps, and allowing for state and local policy makers to draw insights from how their populations are moving and interacting with each other. This allows them to assess high risk scenarios for Covid transmission. That sounds really broad, but we’ve got some pretty cool use cases.

J: Let’s hear about some of them.

D: Absolutely! The use cases we’re leading with at launch are all related to our heat map dashboard. The heat map allows a user to create a custom geofence around a specific area. Let’s take, for example,Memorial Day weekend in Chicago. Even though the beaches in Chicago were closed, a lot of people were congregating at nearby beaches in Indiana. Understandably, the city may be concerned that people congregated at those beaches, exposed themselves to infection, and then returned to Chicago. By geofencing those beaches and then selecting a time, you can see where the beach-going populations returned to after the weekend. Now the intervention here for a policy maker might be: I see four or five concentrated areas where people returned to after risking exposure at the beach; two of those areas don’t have any testing sites. In anticipation of a likely future outbreak, why not send mobile testing centers to those neighborhoods? That way you’re being predictive and proactive rather than reactive.

Another example. The city of Chicago is in the process of cautiously reopening right now. And one of the first places people are returning to is parks and other outdoor areas. Using our tool, decision makers could see which parks are particularly crowded. They can identify these overburdened parks, and then take some steps to alleviate that stress. For example, they could prioritize opening streets for pedestrians near these congested areas, to offload the burden of that park. Our platform is a mission control center for being able to understand where vulnerabilities for crowding are. And beyond that, because you’re not just able to look at crowded areas, but also where those crowds originated and where they went to afterwards, you’re able to extrapolate trends. Our platform helps you anticipate high risk scenarios and communities before the crisis is at its peak.

What’s difficult in a project like this — and in dealing with big data in general — is that there’s a big difference between what is interesting and what is actually useful. For the last month, we have been working hard to extrapolate the latter from the former through demos with government officials in more than one dozen states. The platform we have now is the result of us really listening to what is needed. We’ve identified their pain points, and tried to determine how the data can be used to really help them.

J: That sounds like it would be a really exciting tool for policymakers… but what are you doing to address privacy concerns?

D: Obviously we didn’t just create a product and unleash it; we’ve been doing this the right way. The right way, as I’m sure you know at a GDPR-conscious company like X-Mode, involves being extraordinarily thorough with privacy and security.  We have an ethics advisory board that is composed of some of the leading advocates and ethicists tackling data privacy in our country today. That’s because, from a software development perspective, we know that you need to bake privacy in from the very beginning, you can’t shove it in at the end. We also know that people have some apprehensions about geolocation data being in the hands of governments. So we wanted to make sure there were no holes in our security. Naturally that has taken a bit of time. But the reality is that what we’ve built in an ordinary scenario could have taken six months; we’ve done it in eight weeks.

J: It sounds like you’re doing your best to approach this in the right way, and not as a way to monetize off of a crisis. Another part of that, in my mind, is getting communities involved in their own recovery. How are you going to integrate community involvement in the initiatives of the Covid Alliance?

D: Equity has been a huge focus for us in every step of this process. That is because this pandemic isn’t affecting everyone equally. We see part of our value as spreading access to data as equitably as we can, making sure all these decision makers have access to the same tools. But it also means bringing in people from these communities, to help us understand the vulnerabilities of using certain types of data, and also the ways it can help. A really good example: NPR just came out with a report showing that the majority of testing centers in Texas are in white neighborhoods. Majority black neighborhoods have far fewer testing resources. This is despite the fact the pandemic, it’s been pretty well established, is affecting black and brown communities at a disproportionate scale.

It’s not lost on us that this data, up until very recently, has been almost exclusively used in the advertising and financial sectors. This is data that can empower decision makers to save lives; there is absolutely no reason why our public health officials shouldn’t also have access to it. But they need help understanding how to make use of it. And that’s what our team has been doing, diving into it day after day, having many conversations with people on the front lines of the pandemic, and learning about the functionality of tools that we can create to empower them in their decision making process.

Thank you, Daniel! To learn more about the Covid Alliance, make sure to check out their website today. Both the Covid Alliance and X-Mode were also recently mentioned in a recent article from the Wall Street Journal, so be sure to get yourself a copy of that.

Do you think your organization could benefit from X-Mode’s location data to help combat the spread of COVID-19? If so, you may qualify for our free data offering on the Amazon Data Exchange. Check out the offering today, visit our data licensing page, or get in touch with us via picket@xmodesocial.com. Writer
X-Mode
Location Data For The Cure: X-Mode Teams Up With SickWeather, HarperDB for COVID-19...